NAR Cert-2 with a Binder JackHammer

To cert level 2 NAR I wanted a rocket that would stay under mach and under one mile altitude. I saw a post from Mike Fisher about the new kit from Binder Design called the Jackhammer.
I emailed Mike and confirmed that this kit would fly within the limits I wanted on a J350. And the price fit my budget too.
A bonus is this kit is based on a popular video game so this made it more cool for my son.

It is a great kit.
I took some construction pics along the way:

Before building the kit I entered the rocket parts into Rocsim to be able to sim different motors and any construction changes. Mike will supply this file on request but my old pre-ver6 program isn't compatible with the files from newer versions.
The CP came out the same as the one shown in the kit instructions so I must have done something right.

Due to the size of the motor I changed the nose cone construction to have the eyebolt in the tip along with about 200 grams of epoxy. To avoid a recovery failure the epoxy plug was also bolted in. The bolt heads gave the nose cone a cool look. Drag Shmag !

OROC's Spring Thunder was upon us. And I was down to the wire. Late night painting, rocket tips over getting dog hairs in the finish.
A bit more drag to stay under the mile RUFF!

Brought hardware to the launch to install motor retention the night before in camp.
Didn't have time to paint the nose tip black or put the decals on (except for the CP marker.)

Sorry, no lift off pic. Shutter went off way too soon :-(

The flight was straight. Mid delay motor ejection was a little before apogee just like Rocsim said.
Recovery went well with no damage whatsoever.
Motor case was retained as snug as a bug.

The rocket flew so well I decided it had earned the rest of it's decals so I put them on: 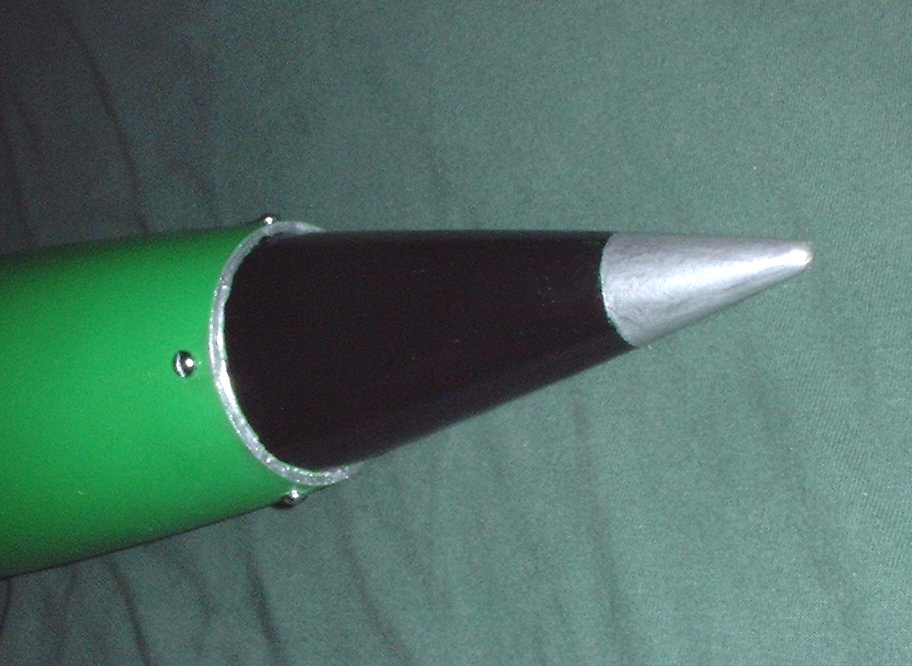 The next flight will be on another J350 when my son is able to come out to the sage and see it fly.

Thanks to Jack Caynon and Kim Toll for being my NAR cert team. Steve Tarr for taking care of the test and paperwork. Bob@SunRiver for being my LEUP buddy. Paul Gablehouse for keeping an eye on me as I assembled the AT motor. And Mike Fisher for the great kit and build advice.

After certing NAR L2 at OROC's 2007 Spring Thunder launch I decided to relax and play photographer.
Here are some of Saturday's launches.

Travis Johnson's Thug going up on an I211:

Kim Toll's rocket on a K.

I was away from the site but caught this one going up.

Back to the Science-guy.com rocketry main page.